A long time ago it was said that a sad thing is to be happy by yourself. Therefore, I wish to thank all of you, members of international police association (IPA), who entered the biggest police family to share this joy with us. Your presence is a proof that we are on the right path. And that path is called service through friendship, cooperation, fostering and developing mutual solidarity, humanity and tradition, both in terms of our national sections, and within the large international family, which has over 500,000 members of police agencies from 67 countries around the world.

Our moto “Servo per Amikeco” (“Service through friendship”), has reached to unimaginable number of people wishing to build bridges of friendship and international cooperations between police officers. In this family it doesn’t matter who has the highest rank, in which God he believes, what his uniform is, the color of his skin, etc. The things we all have in common are respect for human rights, freedom and respect for all that is written in the Charter of Human Rights of the United Nations.

With the help of the highest leadership, the Ministry of Interior and realizing significance of this international organization, we accomplished many new and important contacts and interpolice friendships and closer ties have been established with the members of police services, primarily in neighboring countries. Therefore we expect future support of Ministry in realisation of the activities, because that kind of sinergy between the police officers and Ministry can be mutually useful.

In the previous period, IPA Section of Serbia, as a full member since 2007, has achieved great success, both in the development of mutual friendship among police officers of the Ministry, as well as at the international level. Many international meetings were held, where we exchanged experience in work, but also friendly contacts were made with a variety of sports and contents related to culture, history and tradition of fostering friendship among police officers of our country.

When it comes to international plan, IPA section of Serbia has, both with bilateral and multilateral cooperation, made invaluable contribution to the integration of our country, our Ministry of Interior Affairs and our police officers in the world that gives less importance to mutual borders, and more importance to developing humanity between nations, friendship, solidarity, fighting against all sorts of crime, the world which has no borders.

The soul of our IPA creates infinitely space of freedom and wealth where even the time stops.
Each of us should scratch their past and light a torch of improvement based on bright examples of wandering through the darkness. The past is a guidepost, but not a priority on which the future of IPA depends exclusively.. The only future is the one that we create here today.

Because we know, the one who doesn’t dream about the sea will never build a ship. This is our ship. This ship doesn’t have, and it will not have a captain. There are only sailors. The ones who know to read the compass called “Servo per Amikeco”. We are grateful to them. They know that everything that we do for ourselves is short matter, and everything that we do for the others is eternal.

The true joy is to be the part of the objective which we ourselves set as a priority. Life of every policeman belongs to whole community and while he lives, his privilege is to do what he can for it. A policeman should be totally in charge because the more he works and leaves behind him, the longer he will live.

Section of Serbia is facing a new phase in the process of its development. It is necessary to implement new international standards in most legal acts of the IPA to form new regions, helping those regions and enable the establishment of balanced development, improve communication with the police unions, increase activities in order to promote IPA…

In the period to come, I expect from all members of IPA Sections of Serbia that all their capacities put into operation of their country and the Ministry of Internal Affairs, both at domestic and international levels.

There is an old Latin saying: “Plus actum quam scriptum valet”, which means “Deeds are worth more than words”. The achievements that have been accomplished are resulted as considerable and indestructible. For those who come to contribute to the further expansion of friendship, humanity, solidarity, unity, voluntary service and hospitality, we can say that everything can fit in three words: “Servo per Amikeco”.

We are for success! 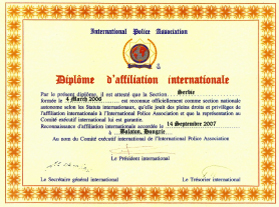